skip to main | skip to sidebar

We will be starting tonight, as third team out of four. With the experience of last night, it’s really hard to predict, when this will be. According to the schedule we’re supposed to start at 1:30 CET. But this can be delayed or changed without any further notice. So if you’re interested, it’s probably best to check the ESA life stream once in a while.

Our team spent the day fixing hardware. In the morning, we decided that there is not much use of additional testing. We will not have the time to change and improve things anyway, but it would introduce a certain risk to severely damage the robots and not being able to compete at all. Instead, we used the time to improve our hardware - especially making it more robust. The pajamas have been working fine so far, but as the robot has to travel long ways on really rough terrain, we thought it might be better to enforce them. Also we exchanged almost all cables of the pully-system, hoping to prevent bad surprises like on Thursday.
At 9 pm the challenge started with the team from Finland, who where followed by the Jacobs University Bremen and Madrid. The team from the UK was unfortunately unable to start due to three 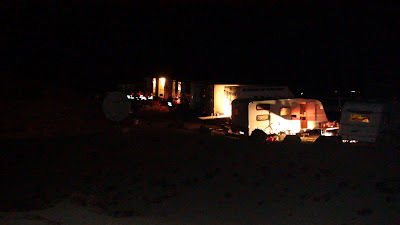 The base camp at night. It’s a really magical place at night. It’s buzzing with students that work in the dark outside their trucks, giving the last finish to their equipment before getting to start. 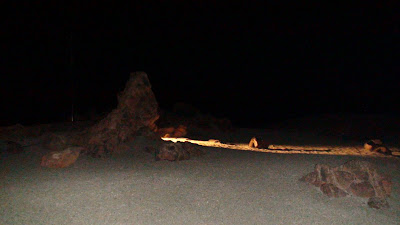 This is how the way to the actual crater looks like. The team of the Jacobs University Bremen are about to start. While the Lander is illuminated with this very weak side light, the inside of the crater is completely dark.
Posted by Team ASL at 10:16 PM No comments:

To be honest, there wasn’t a lot of testing for us today. Just after we carried all our stuff to the top of the testing hill, the WiFi-adapter on the walker broke down. After several unsuccessful attempts to fix the problem via software, we had to take the whole robot apart and actually install a replacement card. Then we could do a couple of steps downhill that were really promising with regard to the stability of the robot on the slope. Even without being supported by the tether cable, the robot didn’t slip an inch. The scale-like plates on the bottom are doing a great job. Unfortunately after getting to deep into the crater, we lost communication and had to abort the trial. And at this point everything started to go wrong. First the hardware broke down. We had to replace some of the cables in the pulley system, exchange one of the bevel-gears, and keep patching the pajamas. At the same time, we had to work on the communication issues until deep in the night, so that we couldn’t do any of the testing we were supposed to do (like spotting the specimen, collecting it, and generally navigating in the dark). It was a bit frustrating after the extremely promising first trials on Tuesday and Wednesday. But then again, it’s probably better to have to the trouble now, than during the actual challenge. 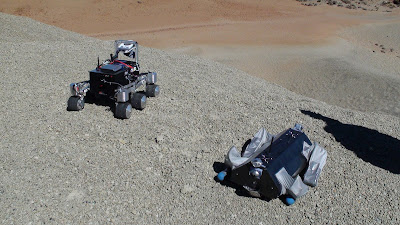 The two robots right at the edge where we were testing today. The slope is not as steep as it appears in this picture, but even for humans, it’s really hard to get up the sandy inclines. 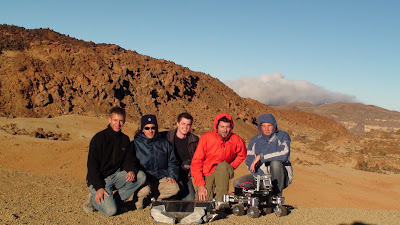 Our team on the top of our testing peak. It’s Tenerife, but we’re at more than 2000 meter altitude. So it’s not too warm. From left to right: Andi Lauber, Cédric Pradalier, Martin Latta, Oliver Baur, and David Remy.
Posted by Team ASL at 10:06 PM No comments:

The Tenerife-Virus hit the camp. Eight people got hit by this nasty sickness that takes you out completely for 24 hours. Unfortunately, Cedric and I were among the lucky winners. So no Lunar Robotics Challenge for us today.
Martin, Andy, and Oli finished the sealing work on the walking robot in the morning, and adapted our gaits and calibration to the new configuration (with scales and ground plates). Unfortunately, once they were ready to test, it started to rain at the camp. So we have to do our big all systems test tomorrow. On the other side, they were able to take advantage of the time, and implemented additional motions for the walking robot. We’re now able to crawl way faster. Traveling about two meters/minute (which should now be fast enough to complete the mission in the given time span of two hours). We also implemented some motions for fine adjustment and collection of the soil samples. Tomorrow, ESA will provide the actual sample material, so we’ll know how this will work out.
Posted by Team ASL at 6:31 PM 1 comment:

Lunar Robotics Challenge - Day 2 – Getting our Robots Ready to Run

Today was the day we gave our robots the final touch and had them playing in the sand for the first time.
Andy and Martin spend the entire day working on the walking robot. For the first time, we put on the pajamas (which miraculously fit) and made everything sand proof. Also the metal ‘scales’ on the shanks and the main body were mounted. We are really happy to see that the range of motion was not reduced by these additions. In the late afternoon, we were able to make some first crawling trials and saw that the robot behaves very nicely in sand. The motions are smoother then on the hard floors of our ETH-lab, and it seems that the robot has the climbing abilities that we hoped for. 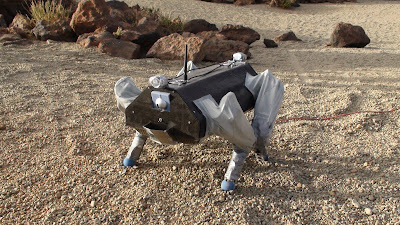 Cedric ran some tests with the Crabli, which was being operated in an outside environment for the first time, as well. It worked as we hoped, no mayor problems with the steering and communication. The only issue we have to deal with are little rocks, that can get stuck in the wheels of the rover and block them. So I guess, there will be some tape, paper, and maybe tooth brushes to form some simple protection during the actual challenge. I was working on the SpaghettiBOT (as we started calling our winch), but (besides tons of Blue-Screens) nothing really special happened there. 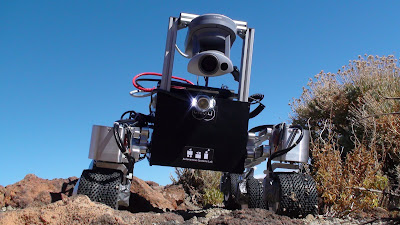 Also the starting order was determined today. We will start as team 7 of 8. On the upside that means that we have one more day of testing then the others and can learn from them. On the downside we have to start around 1am (local time) Sunday morning when it will be really, really cold! If you want to watch this event, ESA will provide two live video streams during the actual challenge. They will be visible with Quicktime or VLC and can be found at the URLs:
rtsp://195.169.140.121/Live1.sdp
(or if you are behind a draconian firewall rtsp://195.169.140.121:80/Live1.sdp)
rtsp://195.169.140.121/Live2.sdp
(or if you are behind a draconian firewall rtsp://195.169.140.121:80/Live2.sdp)
One will follow the robots, one will cover the controlling team (freezing in the night). Our turn is Sunday morning at 2am (Zurich time), so this might be a nice thing to watch after coming home from going out.

We arrived at our hotel very late on Sunday night. It’s a really remote spot almost on top of the Teide volcano on Tenerife. After the 12 hour trip, we were joking that ESA set up the event here, because it’s almost as remote as the moon itself. Then again, the scenery really rewards for the long trip. We had to climb more then 2000 meters, starting right at the coast, through a rain forest, until we reached a desert-like landscape in the bottom of an old crater. It’s a truly lunar scenery with petrified lava-streams and weird rock formations that give the whole setting an extremely extraterrestrial touch. Especially when driving through it at night.
Our first day started rather slowly. ESA was putting up the challenge site on which we took a short stroll before we explored the area around el Teide. It was really nice to be at the actually testing grounds and to see what our robot has to handle. During the last months, the only information we got about the challenge came from the blogs of our competitors and google-earth. It gave us a rather abstract and competitive feeling about this event. But seeing the crater today, we realized that the challenge is not at all about being better then the other teams, but about completing the mission scenario. But even if we fail to do so, the entire project will be a great success. Just getting a robot here and being able to test it in an environment that no lab in the world can provide, is more then we could have asked for. The crater seems bigger in reality then we imagined it. It’s also way steeper then we thought and the bottom is covered with big rocks. The soil is made up of granular volcanic rocks (with a couple of millimeters in diameter) that are super-light and, despite their size, almost behave like sand. So we’re really happy to have a tethered solution that will help us get the robot uphill. 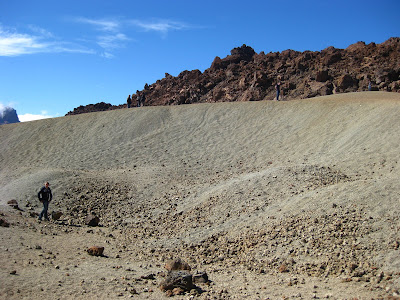 On the picture above, Andy is marking the lander’s location in the far right background. Martin is standing on the edge of the crater and David where we expect to get our soil samples. Considering that our robots are less then half a meter long, the distances are considerably.

Our urges to start immediately were hold back by a lack of robots, which arrived at around 4 pm at the testing site. Thank god, nothing was damaged during shipping. Once they were there, we instantly set up shop in our truck before we had to go to the security debriefing at our hotel.
Posted by Team ASL at 5:54 PM No comments:

This was the first complete system test, less than 20 hours before the departure of the robots. In this test we had:
The test was done in the dark, with the three controllers (David, Oli and Cedric) only using the robots cameras for their situational awareness. The goal was to "find a white object" and they had no prior knowledge of the room configuration. All communications from the landers (SpaghettiBot) to the Crabli and Walking Robot where done through a multi-hop wireless network.

The video is a recording of what was visible via the Crabli's camera, sped up 5 times. This camera was also used to drive the crabli, not to record the experiment. As a results, the image has saccades and sometimes focus on weird things such as the Crabli's own wheels.

Even if we would have used the opportunity of more testing, we are quite happy that our infrastructure is now working properly. Our control stations are stable and usable, our wireless network can handle the load, our night perception is acceptable and our locomotion capabilities have been proven.

How will we do in the sand outdoor? Let's wait and see...
Posted by Cedric at 3:22 PM No comments: